What is the Opposite of Leadership?

I often think about, read about, talk, write – even speak – about leadership. It’s my work, my Masters degree, my curiosity, and my muse for so much of what I do and create. 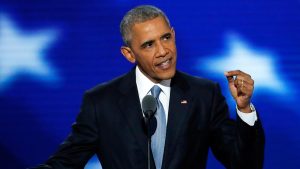 Obama spoke to this in his 2016 DNC speech, pointing out that for those with the wherewithal to get “in the arena”, mistakes are “what happens when we try.” True words.

The opposite of leadership is not bad leadership.

There’s something called Servant Leadership (a great little book by that name was required reading in the Holistic Leadership Masters Degree program I graduated from. Robert K. Greenleaf is the author, and I encourage you to read it). ‘Servant Leadership’ is proof that leading from behind can be an extraordinarily powerful Model of Leadership, exemplifying the inter-dependent dynamics of leading and following.

The influence of servant leadership isn’t just evident in books and political arenas, it’s everywhere a lead-and-follow dynamic is. You can even, for example, see it on the dance floor of a salsa club. I say this as an admitted salsa dancing addict: Watch a couple dancing, a good lead and a good follow. Then, watch another salsa dance with a good leader but a poor follower; you can’t tell me that follower isn’t “leading”!

For all my faults and weaknesses, and however imperfectly I lead – and follow – on and off the dance floor … I make a point to live in the arena, not watch from the sidelines.

My qualifications on the subject of Leadership are growing and expanding rapidly and in real time.

Leadership roles aren’t new to me. As entrepreneur of a start-up for the last 12+ years, I’ve been the lead coach, mentor, and owner of my thriving coaching business … and there’s my formal education and training … and, a fun fact for you astrology and birth-order buffs, I am a Leo and first-born child (for better or worse, Bill Clinton and Barack Obama are too).

Since early in my childhood I was frequently told I am “a natural leader.” It is true that my instinct has always been to lead. I was Student Council President. I was cast in leading roles in school plays. I was president of the AFS Club, and captain of the soccer and softball teams. Perhaps years of bossing my little sister around counts for something too. It was a rarity that, when given the possibility of leading, that I was not leading in some way. (In full disclosure, I was co-captain of those sports teams. The other captain was the “natural athlete” 🙂 ).

But I digress. What I want to share is this:

It is so important to know that there are many Models of Leadership. I spent much of my Masters Degree studying them, across cultures, and what is so *glaring* to me about the 2016 presidential election is seeing the various models of leadership at play. For example, Trump has said that, as a leader, Putin gets an “A”. And truth be told, when looking through the lens of a hierarchical, military-style, top-down Model of Leadership … he’s right! So would Hitler for that matter. (I’d be remiss if I didn’t mention here too, that even the “A” to “F” grading system lives within this model.)

Thankfully, this model of leadership is NOT the only one, despite the fact that those who work solely within this top-down leadership model would tell you that it is.

Ask a Native American tribe leader who is looking through the lens of a Consensus Model of Leadership, for example, to ‘grade’ Putin or Trump or Hitler or Kim Jong as leaders… and you will get a very different assessment.

Our 2016 presidential election is about so much more than The Donald vs. Hillary. It’s about which Models of Leadership we are willing to subscribe to, vote for, participate in – and which ones we won’t.

It’s about refusing to be a spectator, summoning the audacity of hope, and getting in the arena.

I believe in the power of people coming together to contribute to our world and to empower one another through collaborative leadership models.  I love supporting, coaching and nurturing those who are willing to get in the arena and lead – from the front, the side, and at times from behind.

Engagement, contribution and participation is what makes YOU a leader. Anchored by action, together we are forming a movement that others are inspired to follow, engage with, participate in, and contribute to. We are joining forces and aligning the power, potential, and momentum to nudge our planet forward. Let us move together in the direction of love, collaboration, teamwork and care for our human race and our planet. A dance, a lead and follow of Awakened People. Join us on this great journey together to see new places, in new ways. To make new discoveries, not only about the world, but about the intricate and expanding landscapes of your mind and heart.

YOU are a contributing part of this evolution and this awakening. Do not be a spectator. Do your part to engage and lead within our human family. Together we really are so much more.  Come and join forces with myself and other innovative leaders – alongside you, behind you, and in front of you.