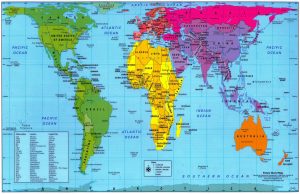 One of the most stimulating and controversial images of the world, the Peters Projection World Map was first introduced by historian and cartographer Dr. Arno Peters in Germany in 1974, generating a firestorm of debate. The first English-version was published in 1983.

Representing a round planet on a flat surface is a challenge. The Peters Map is an area accurate map, and in contrast to many of the more commonly seen maps of the world, North American and European countries appear smaller, and Africa and South America strikingly larger. The map has passionate fans and staunch critics.

Here at Nomadic Leaders, we think the Peters Projection World Map is pretty awesome. Why? Because we welcome and celebrate opportunities to see things in new ways.  By disrupting assumptions we’re able see things with fresh eyes and renewed curiosity. The Peters Map offers an unorthodox, mind-bending new angle on how to perceive and understand our world.

What do YOU think of Peters World Map?